Well, yesterday was the day that pretty much every Irish person looks forward to all year. For a lot of us, it’s the one day of the year that’s ours. And Ivory Coast’s, thanks to the embarrassing amount of absolute BLOONS that mix it up every. Single. Year.

On St Patrick’s Day/ St Paddy’s (NEVER St “Pat’s” or St “Patty’s” – honestly, American’s need to STOP that now), we get to have a parade, take over town, fill the streets, and just be loud and proud of our nationality. For most of us, it’s a really important and big day.

It’s not just about getting steaming from 12pm and that being socially acceptable. It’s not just about having a few days off (although it helps), or being able to blast the Wolfe Tones without your neighbours ringing the police to complain about the noise. Sweet revenge for your INCESSANT ‘Oasis’.

It’s about being able to wear your GAA, Celtic or Ireland jerseys (despite never watching a match in your life), without being afraid of getting dirty looks, abuse or starting fights for it. The most judgement you get is when you walk about with a Tyrone jersey (nobody likes Tyrone) or have an Ivory Coast flag on your face. Like seriously lads, GREEN FIRST.

It’s about being proud of your country and celebrating everything it’s overcome. It’s being able to say, “You can burn my flag, but I’m still wearing it.” It’s about looking ridiculous, having a geg, forgetting about your uni work and getting a bomb ass insta photo (with a patriotic caption courtesy of Google Translate).

Yeah, other countries use it as an excuse to just get absolutely steaming, but, it doesn’t really matter. Because, they’re still celebrating our day. They’re wearing our colours, flags and dodgy shamrock hairbands. Things get lit up, painted and dyed green. The world goes green for a day, and it’s like a show of solidarity for this tiny, green, FREEZIN wee island that we live on and always complain about.

But, this year was a LOT different. Most people who go out, sat in. Pubs and clubs were closed on their busiest day of the year. People sat in and drank tea instead of going out to drink Magners. People spent 8 hours watching Netflix instead of spending 8 hours having a geg on the streets. People said they were having a “quiet one” and actually meant it. Wild.

A lot of people said that St Patrick’s Day was “cancelled”. But, it wasn’t.  You can’t “cancel” a day. You can cancel events, concerts and plans; not a nationality.

The streets might have been empty, but buildings were still lit up, people still wore jerseys, painted their faces and dyed their food a rare looking green. Yeah, some people CLEARLY didn’t get the HINT went out (smh), but so many of us gave up our favourite day traditions.

See, we don’t need to be out in the streets, parading and shouting about being Irish to be Irish, and love being Irish. We don’t need to be drinking to celebrate our history and future. To be honest, I think it shows a lot more pride and respect for your country when you’re putting the health and safety of its people above its biggest day of the year (@ the people who went out).

We don’t need St Patrick’s Day to be proud of who we are, where we’ve been and where we’re going. We survived genocide the potato famine, we survived 800 years of oppression, we survived losing 6 counties, and so many lives of those fighting to get it back. Most importantly, we survived the shame of being represented by a turkey sock-puppet in Eurovision. So, we will survive this.

Until next year, lads. Sláinte.

You’re born into a family. A poor family. They struggle to make ends meet, but they get by.

Your family don’t want to give you up, but the rich family come with lawyers and papers and a legal battle that your family can’t afford to win. They aren’t able to fight them off and keep you.

So, you grow up in the rich family. But you’re never really a part of it. Your adopted parents don’t pay you much attention, and God knows your new brother doesn’t like you. He doesn’t want you in his house, you’re a burden. You should go home. Where you belong. But that’s where you were when they took you. You were home and you were happy. They adopted you but didn’t want you. They treat you with hostility and disdain. You get money, yes. You get clothes, yes. You get things your own family couldn’t give you. But it’s still not “home”. You talk like them, you dress like them. But you’re still not one of them.

When they take you home they rename you, to take away your identity and ties to your real family. They can do this, you see. They have the power to do so. You’re called by this name, but you don’t answer to it. You correct people when they say it. Because it’s not your name. It never will be.

As you grow up, you revisit your old town. You see your family and friends. You’re happy to see them, you missed them, you want to be with them. But for some reason they don’t feel the same. You’re not one of them anymore. You don’t dress like them, or talk like them. You’re an outsider. What are you doing here? You’re a traitor. You’re one of “them” now, so go be with them. But you didn’t choose to be one of “them”. They took you. You had no choice.

Your adopted family couldn’t be bothered with you anymore, all you do is cost them money and you don’t give them much in return. You were a waste of an investment really. Your real family could try to get you back now, it’s been a long time and they have more money. But it seems like they don’t really want you back now. It seems like they’ve moved on. They’ve learned to live without you. They can sustain themselves. Your old town is different than it was, you see. People are no longer poor. They’re wealthier and happier and the rich families don’t come around anymore, thank God. They haven’t been around in a while. The rich families aren’t nice. So you aren’t nice.

So, what do you do? You’re living with a family who don’t like you. They mock people like you, like your real family and from your old town. They make jokes, dress up, they attack people like them. You hate it. You try to stop them, tell them it’s wrong. But, if you don’t like it, go home, you’re told. Go back with these families because it’s where you belong.

But where do you belong? You’re not happy with the rich and they’re not happy with you. But you can’t go back to your real family because you’re not welcome there either. It’s too late now to go back. You tried and tried when you were younger, put up numerous fights. But what’s the point if don’t want you anyway? You spend your whole life trying to make them see that you want to be with them, you never wanted to be taken away, you had no choice.

But one day they’ll see. One day they’ll realise how desperately you fight and have fought to be back with them. The rich have less control now, they can’t own you forever. Maybe in a few years, when you’re 18. There’s a court case then. Your family can decide if they want you back. You’ll always be one of them at heart. You never changed. You dress differently, you talk differently, but you act the same. You’re still the you that was taken away. Your old family may not know who you are, and your new family may not either. But you do. You know where you belong and that’s home. Home is Ireland, and you are the north.

Well, I’m sure you all probably know the whole drama surrounding Azealia Banks this week. But if not, here’s wee recap:

Basically Azealia Banks (she’s a “rapper”) was due to perform in Dublin’s Academy, and so was flying over from wherever she was. She got into a dispute with the flight attendant and then left the plane. She was meant to be flying with Aer Lingus, so instead of insulting the employee or the Irish air line, Miss Banks had to take it a step further and insult the whole country and its people. How nice.

She went on a big rant on Instagram, crying and saying that all Irish women are “ugly”. This is obviously untrue, I mean, have you seen me? My ma says I’m gorgeous. Anyway, she obviously had a bit of making up to do before her concert to avoid being “potatoed” (egged, but, with spuds) on stage as one Instagram user threatened. Way to break stereotypes guys.

After sailing over (she refused to fly), she played to a surprising 800 “fans” – maybe they forgave her, or maybe they just wanted to get their money’s worth – dedicated to “beautiful Irish women”. This girl should really teach a masterclass in PR damage control.

So that’s that then? Oh, honey no.
For literally no reason, Azealia decided to bash us once more online. This time, she stepped up her childish insults by decided branding the Irish as “inbred”, “barbarians”, and said to one Instagram user “don’t you have a famine to go die in?” What a lovely gal, a true delight. 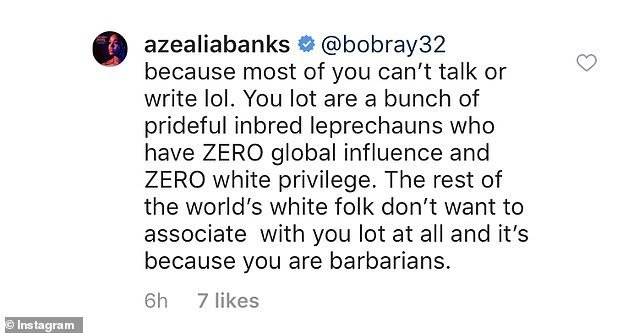 Anyway, why did she do this? Why be racist not once, but twice to a whole nation purely because of one altercation with a flight attendant?
Because she needs help? Likely. But I’m gonna Louis Theroux it and whack another theory in the mix: she needs publicity.

It’s no secret that apart from her banger “212” – which is SUCH a tune by the way, her other songs haven’t exactly topped the charts,
and she doesn’t get much airtime because of the style and language in her music. When all of this was going on, a lot of users were asking who she even was; I – a former fan, didn’t even know she was on tour (in my own country?)

Her Instagram story went viral, with users flocking to her profile to watch her “rant”. People who didn’t even know who she was or forgot about her went on too, thus (what a word) planting her name back in their minds. People went on her profile, Googled her, talked about her, commented on her posts, giving her a stack of bad publicity. Which is still publicity.

Plus, Azealia Banks gets more exposure and is better known for her “beef”s with celebrities like Lana Del Ray on Twitter than her music. She’s a controversial figure, and she doesn’t exactly have a positive image or reputation, so what has she got to lose? The hearts of a nation, yes. But sure, we’re all inbreds and apparently the rest of the world doesn’t care about us or want to associate with us leprechauns anyway.

So, maybe this was just another little PR stunt to keep her in the public eye, or maybe she is just a header. Who knows?